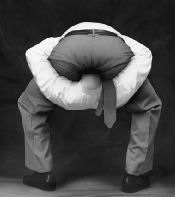 Ok, I know that I don't work for the dumbest company in the world. In fact, usually they're pretty good with allowing the people who do the work to make the decisions that affect how they do their job. However (and you knew a however was coming), recently we've undergone a re-organization. Now for those of you who are unfamiliar with the term "reorganization" it is synonymous with "You people don't know what the hell you're doing, we know your job better than you, and we're going to do it better and force our way down your throat". Of course, in the process of doing all that they're going to blather on with all the cool buzzwords like 'synergy', 'competency centers', 'paradigm shifts', and '10,000 foot view'.
Personally, there's at least a few people I'd like to take to 10,000 feet in a plane and push them the hell out.
We were told of this reorganization back in September/October time frame. Of course it was all hush hush, and no one was to know anything about anything. And the funny thing was, no one did. Including the people who were supposed to be running the show. The executive in charge made all the decisions regarding the entire infrastructure of the group, up to and including appointing people who only knew they were being appointed a week or two before the 'group symposium' where it was all being presented.
Leadership presented this symposium as an opportunity to get all your questions answered. But when it came down to it, we left with more questions than answers. They (that would be ONE person they, so I guess that's 'they' in the royal sense) structured the top level, and the 2nd level of the org chart, but basically left hundreds of people reporting to about 4. In addition, the group that was growing the fastest amongst the three combined groups, and the one that was the most profitable, was left out of the leadership tree. So apparently that's how my company awards you for kicking ass and taking names, by moving you out of the way, because apparently someone else knows how to do it better.
So, because of a wide-spread uproar(ok, there was about three of us who actually complained, but all three of us have grown a bit wider than we used to be), apparently it has been determined that a more detailed OrgChart should be developed. However (and get this) because of the complex nature of our team, it's going to take some time and thought to do it. Apparently the org chart where we were growing on an average of 30% a year wasn't good enough for them.
And people wonder why I have such a bad attitude.

Nothing better than an email that says "we hope to maybe have something definately by this date". Contradiction++.

i blame your bad attitude on that night we had in tiajuana...where you and that hooker shared a bottle of tequila, only later to find out it wasnt tequila, and the hooker was a dude.

Dude, you had that night too? Man, now, I don't feel that stupid...