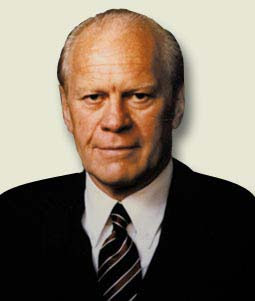 While his presidency was undeniably short, Gerald Ford left his imprint on what a good man could do to the office. Instead of allowing the continued infighting and political battles to go on, Ford did the right thing to allow the country to move on and pardoned Richard Nixon. As proven in the 76 election, this was political suicide, but it was still the right thing to do.
Ford was known for his principled stands on a lot of things, even if they weren't necessarily the most popular positions. That of course made him a great choice for president in 76 and had I been old enough to vote, I would have voted for him then. While we can't say for sure that the country would not have still gone through the massive economic crisis inpired by Jimmy Carter, (who am I kidding of course we can!) we do know that we would have had a man of principle who would not have been running around the world disrespecting America for the next 30 years and befriending any dictator who would have him.
As a Naval officer in WWII, he served in the Pacific fights, on the USS Monterrey, a light aircraft carrier that helped secure the Gilbert Islands, Makin Islands, and was part of the Phillippine assault. During a typhoon, the ship was damaged and Ford was nearly swept overboard. It was sent back to Washington for repairs and his service in the war was over.
While I've not agreed with President Ford over the past several years, moderating in his age, I respect his opinions and his desire to see the country move forward.
Semper Fi sailor, fair seas and following winds. RIP
at 12/27/2006 09:25:00 AM No comments:
Labels: Politics

So, I finally am joining the 'mp3' world, as the wife has purchased an iPod for me. Not sure whether it's a kick-ass one or not, but I can watch movies on it, so that's definitely a cool thing in my eyes. For a techie, I've definitely drug my feet significantly in this area, because honestly, I just didn't see the value of getting one, as I pretty much listen to whatever I want to hear on the radio. But as I'm getting older and grumpier, I get irritated with all the damn commercials. And while Sirius or one of the other satellite radios seemed to be an option, I couldn't see paying a monthly fee to listen to the radio....So I decided it was time.

But the iTunes interface seriously sucks. I know I'm the only person in the world that thinks so, considering its financial success, but damn, how in the hell can they be as successful as they are with an interface that is horribly 'non-intuitive' (yes, it has me so irritated I'm making up words). The only thing I can think of is that people accidentally buy music they didn't intend to, because of the interface and that explains the profitability.

And of course, trying to download a song today...a single friggin song was like pulling teeth. "We're sorry. We cannot complete your request on the iTunes store at this time. Please try again later" was getting ready to make me throw the damn thing across the room. But finally, Dragula from Rob Zombie came to my iPod and all was a little better. Only $24.01 left to spend on my gift card. Yeesh.
at 12/25/2006 05:47:00 PM No comments:

If you can listen to this spoken word piece without choking up, you are a heartless bastard. And since I've been called one on innumerable occasions, I can speak from experience here.

For the story behind the poem and more info, go to the site.

And anyone who wants to give me attitude about the title 'soldier', know that the original poem was written by a Marine, and usually the lower case 'soldier' is used to refer to any fighting man or woman for a country. The upper case Soldier is usually used in reference to the Army specifically.
at 12/25/2006 02:44:00 PM No comments:
Labels: Marines

The Donald vs Rosie in a smackdown

Man, does Donald Trump have balls the size of watermelons or what? Love the way he called out the FatPig calling her a disgusting human being with a mouth like a truckdriver. That'd be supported by her recent use of what could be considered a derogatory racial slur against Chinese people: "You know, you can imagine in China it's like `ching chong, ching chong chong, Danny DeVito, ching chong chong chong, drunk, "The View," ching chong'. But of course, no one really called her out in massive headlines like George Allen and the macaca incident.....

I just like seeing MissPiggy called out for her stupidity by someone outside the political arena. She's a seriously stupid human being who should go back to doing the one thing that she has proven herself good at...eating. Oh wait, I guess she never really stopped.

But I do hear that she's on a diet now that's high in fiber, apparently something she's been working on for a while.

She's only allowed to munch on carpet.....

Celebrate with the one you love

What would Jordan do?

Ok, let me get this clear right up front: I am NOT an NBA fan. Period. I think the league is full of wannabe gangsters and people who, if they weren't playing basketball, would be doing time at the local penal institution.
Nor do I like Michael Jordan. I always thought that he was arrogant and egotistical, as well as not the greatest role model, despite the constant marketing, with his penchant for gambling, womanizing etc.

However, would Michael Jordan have slapped another player, while he was shielded behind a third player, and then ran away like a little bitch, a la Carmelo Anthony this weekend? I think not. If the NBA doesn't suspend this pansy, sucker-punching, wannabe gangster for the rest of the season, Ron Artest got hosed.

If you know not what I am talking about, check this out:

Well, if you read World Net Daily, that'd be the position you'd take. At least, according to this guy.
Seriously, I laughed when I initially read the beginning of the article, but as you read it, there are some points that I'd have to refer to a physician or someone who knows endocrinology way better than I do in order to refute.

They were 18 year old freckle faced Marines and sailors, away from home for the first time. Recovering from a Saturday night liberty, they awoke slowly on a Sunday morning, typical for the day.

An air raid siren sounds. "Must be just another drill...damn Corps, is killing us with this crap on a Sunday morning", thinks one Marine. Another siren sounds. And another. In the distance the buzz of a plane engine, like a tin can full of bumblebees, is heard. Doesn't sound like the planes normally heard at the base.

At 7:55 am the first explosion, gunfire, and the Marines and Sailors at Pearl Harbor Naval Base knew that this was no drill. The United States of America was being attacked and it was their job to put up the defense, as best they could.

They did a valiant job, but over 2000 Americans were killed that day. Many trapped in sinking ships, with only their brothers in arms around them, to comfort them as they awaited death. Many were burned to death in explosions and fires, and a great number of them were scarred for life, mentally and physically. The survivors fought back, using stationary machine guns trying to swat away the swarm of zeros. Heroes were discovered that day, ordinary men from everywhere in America, doing the right thing, saving their brothers in arms and comforting the ones that cried for their mothers as they lie dying.

This will be the final reunion for many survivors. They meet every five years, and this is the 65th. The 'greatest generation' is fading fast. Those men who were 18 year old Marines then, are now 83. The generation of men and women who built America to be the country it is today, and sacrificed more than my generation and my parents generation will ever know, will be gone soon.

Appreciate their efforts, their sacrifices, and honor their memory.

The problem with this country today is ______

I was walking into my place of employment and just generally in my own little world as I wandered into the building. Meanwhile, a guy comes striding up next to me starts a conversation with me. Now, I'm not much of a conversationalist first thing in the AM, and just kinda grunted a greeting to him. We stop to let a truck go by that has a 'Devos for Governor' bumper sticker on it. Apparently that triggered some sort of visceral reaction in this clown as he started on a rant about how it's a good thing that we didn't sell our state to Amway by electing him and that unions would have never seen the light of day again were he elected. Myself, I'm thinking that would have been an election slogan if I was in the DeVos camp, but that's just me. Then the guy starts going on about how businesses have run this country into the ground and how they just suck the people dry. Businesses don't bother to take care of people they just use them and toss them aside.

So, of course at this point, I can't really let this guy just think that he's talking to some equally neanderthal thinking idiot, and point out that if it wasn't for businesses, people wouldn't have the products and services they have. In addition, in the quest for competition, businesses continue to offer more and more products and services for less and less money, allowing the fact that even poor people in the US have air conditioners, TV's, and cars, versus these items being a 'status' sort of thing. Granted they don't have 42" plasmas, but they still HAVE the TV.

The guy looked at me like I was getting ready to shoot my load on his grandmothers face. "You mean to tell me that you think that business is good for this country?".

"Ayup" I said, and walked onto the elevator, allowing the door to shut in his face.

What I probably should have done was welcome him onto the elevator as I destroyed his entire belief structure in the 10 seconds it would have taken him to get to his requested floor. But I figured that the hospital where I work will have enough trauma today, and that I didn't need to add to it.

You hear the one about the 6 imams on a plane?

Or not....Seriously, how stupid can mainstream America be to even begin to buy into this crap. These jackasses created this situation precisely to have something to protest about. This sort of asinine behavior creates 'incrementalism', where little by little, Americans think to themselves "well, they really weren't THAT bad" and we generally accept their crap, without questioning. Eventually, someone with an IQ above room temperature will look around and say "WTF?!?!"

And by then it'll be too late.

Jimmuh Carter gets called out

Way to go caller...more stuff like this, I may actually tune into C-SPAN once in a while:

at 12/04/2006 11:42:00 AM No comments:
Newer Posts Older Posts Home
Subscribe to: Posts (Atom)
“Crouch down and lick the hand that feeds you. May your chains rest lightly upon you and may posterity forget that you were our countrymen.” - Samuel Adams