So, the Republicans aren't the only party of corruption and greed? 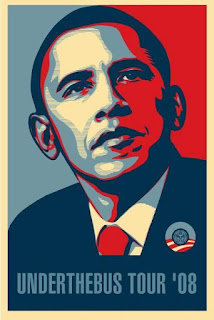 I would have thought that this sort of thing would have waited at least until after inauguration day, but apparently not. Rod Blagoyogonnabesomeonesbitch has "allegedly" sought to auction off the Obamessiah's seat in the Senate to the highest bidder. While I'm sure that others have probably played this game, it wasn't quite so overtly, but Blag has never really had much in the way of true political deftness.

What I love about the whole thing is the major media's full acceptance of the Obamessiah's explanation that his office had absolutely nothing to do with Blagoyogonnabesomeonesbitch and had no conversations with him about the replacement. This acceptance despite the reports that his campaign advisors stating that the Obamessiah had several conversations with him and reports that Rahm Emanuel, the Obamessiah's chief of staff, has had 21 conversations with Blag. But the Obamessiah's internal investigation found no contact and no wrongdoing.
So we're already getting a peek into what sort of results we'll be getting from their justice department investigations. Despite glaring evidence to the contrary, there must have been zero wrongdoing because the Obamessiah merely SAID that there was none. And isn't he the final arbiter of what is right and what is wrong in this society now?
Although if there were a Republican to blame for this, guarantee they'd be putting the magnifying glass so far up his ass that you'd be able to see what he had for lunch yesterday.
at 12/17/2008 08:17:00 AM No comments:
Labels: Obama

Worst part? It's all happened while a so-called Republican was in the White House

Nope, not posting this to say everyone that shops at Walmart is an uneducated brute. In fact, the majority of the folks who shop at Walmart are hard-working folks who are looking to stretch their buck a bit further.

The posting below was something I wrote on a normally conservative website that was holding Walmart responsible for the trampling on Long Island on "Black Friday". The poster basically stated that Walmart was responsible and even if the police were able to identify some of the animals (my word, not theirs) who perpetrated this crime, no charges should be filed:

Good God, the majority of you sound like the ambulance-chasing, corporate-hating, responsibility-eschewing left wing that some of you SAY you hate.

Perhaps we should assign some personal responsibility to the animals who stampeded this poor man. The folks who led the charge, who didn’t have any sort of honor, who were only looking out for themselves.

300,000,000 people in the country. 4,100 Walmart facilities. A large number of them participated in “Black Friday” sales, and only one person was trampled by a mob of unruly animals, at one Walmart.

How is it that the people at the other 4,099 Walmart stores seemed to be able to handle themselves as civilized human beings?

Hold people to a standard and they’ll surprise you. Hold them to the lowest common denominator and they’ll disappoint you.

at 12/02/2008 06:59:00 AM No comments:
Newer Posts Older Posts Home
Subscribe to: Posts (Atom)
“Crouch down and lick the hand that feeds you. May your chains rest lightly upon you and may posterity forget that you were our countrymen.” - Samuel Adams