How is this not illegal?

People all over are complaining that Mitt Romney is doing something that is possibly unethical by giving student fundraisers a 10% commission on every dollar they raise. Basically, if a student raises $1000, they get $100. Seems like a reasonable thing to me, considering the amount of money that many fundraisers get in salaries, it's nice that Mitt wants to throw some dough the student's way and according to various sources, completely legal.

However, Hellary has agreed to pay off the debt that was run up by the Tom Vilsack for President campaign (WHO!?!?...yes, I know who, just emphasizing my point), to the tune of approximately $400,000. 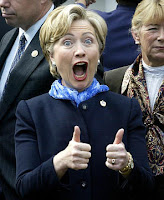 Wow..what a charitable person. Seriously. I mean, I'm sure there was no quid pro quo right? No way that she did it for a specific cause or anything. Just the goodness of her heart. Right?

No. In the same press conference where that was announced, Vilsack also announced that he was endorsing Hellary. The campaign also emphatically denied any connection between the two events.

Man, didn't see that one coming.

Eat your heart out, Lindsay Wagner. Hillary raised $6 million in a week.

Guess we know who the real robot....I mean, Bionic woman is don't we?

Back a few months ago, beginning of the year, President Bush put out an order to fire several US attorneys. These positions serve at the leisure of the President and if he decides he doesn't want them any longer, they're gone. It's the benefit of being the head of the executive branch, that you get to pick and choose at least SOME of the people who work for you. President Clinton actually fired all 93 people in this positions during his term, so it shouldn't be that big a deal.

However, Dimiwitocrats, in their desperation to find something, anything, even if it's something that most citizens could give a flying rats ass about, to discredit the administration, are making a huge deal about this being politically motivated.

Well, no shit Sherlock. You figure that out all by yourself or did you have to have mommy spell it out for you.

All federally appointed positions are political. Duh. Of course these individuals were appointed through a politically motivated method. That's what happens when you WIN. You get to make appointments. And when you lose, you don't. Or in the Dimwitocrats case, you lose, you complain to the media and hope no one actually does any research.

Ok, so I've been negligent with my postings of late, lazy even. Busy is an excuse, but not a very good one. So hopefully, the following videos will keep y'all entertained until I can come up with something amusing to talk about...something that gets me sufficiently fired up to want to blather on for more than just a paragraph or two:

Hilary Hot? Are you kidding me?


The shot heard 'round the world, aimed straight at Hilary:

Only the pillowbiters on the left wing could look at the confession by Khalid Sheikh Mohammed, mastermind of several terrorist attacks, as an opportunity to bash the CIA and American government.

Who the hell cares if some murderous thug terrorist is tortured? He didn't seem to give a rats fat ass when he was blowing up clubs in Bali and torturing the people there, or beheading Daniel Pearl.

And from the "Jesus, about time you asswipes got on board" department, the NYSlimes finally publishes an article critical of Al Gore and his "WE'RE ALL GONNA DIE HORRIBLE SCREAMING DEATHS!!!" campaign.

They actually include people who are not necessarily activists screaming for government funding to study the concept of global warming (translation: your tax dollars to pay them to take the temperature and measure ice). Real live scientists, not just drum-pounders.

There is a significant amount of information out there that shows that yes, the earth is warming, but the argument is whether it's caused by us, or just a natural swing of temperature, or whether it's caused by increased solar activity. Either way, for someone to make as much political hay as has been made by Gore over an issue like this, just amazes me. Obviously, fooling the Hollyweirdos isn't tough, being that they are a simple minded bunch. However, proving this to people who actually perform scientific activities and they have to PROVE things, is a bit more difficult.
at 3/13/2007 08:28:00 AM No comments:
Labels: Global Warming

Man, life is so much better now that the Democrats are in charge. The war is over, poverty is solved, everyone has healthcare and jobs, and there are hugs available for free on every corner.

Funny how leadership is so easy for those doing the criticizing in the minority, but once they're given the power, they can't seem to get anything done because they're too busy bickering about how they're going to do it. Nancy Pelosi's first 100 days have come and gone with nary a whimper. And did you see any NYSlimes articles about her utter failure to pass anything that she said she was going to pass in her first 100 days?

Apologies all around for not doing much in the way of blogging lately. If anyone has been paying attention to the geek-news around, you would know that an ugly new virus showed its head last week. It infected the offices of various governmental departments as well as the computers of CNN. Well, lucky for me, we got hit with it too.

That is how cutting edge and cool we are. We get viruses before the AV companies even have a fix for them.

So I've been spending many many hours over the last two weeks playing 'whack-a-mole' with the stupid thing. And just when I think I have it nailed, it rears its ugly head again last night, causing me to spend 6 additional hours at work from 5pm-11pm yesterday.

I swear to God, if they catch this guy who wrote this, I will remove his scrotum from his body and sew it to his chin. At least then people will know what they're getting ready to deal with when they see him coming.
at 3/10/2007 08:07:00 AM No comments:

I've said from the beginning that our vets deserve better. The VA is a joke, has been a joke for a long time. Veterinary hospitals treat their animals better than vets get treated at the VA. Finally, the Walter Reed scandal is bringing this to light. Yes, it's an Army hospital and there's a difference, but truly, there isn't. I've been in both, military hospitals and VA hospitals, and if you've seen one, you've seen them all.

Of course, it'll be blamed on President Bush, but let's get real. This started back in the 70's when Jimmy Carter gutted the funding for the Veterans Administration. That's when the VA and military hospitals started heading toward the crapper. Granted it wasn't exactly great anyway, being one step short of socialized medicine, but if you want to see government-run healthcare, look no further than a military hospital or a VA. Y'all sure you want those idiots telling you when you can and cannot have an x-ray?

Since I'm on this subject though, for once I agree with Carl Levin. His recently emailed his constituents about the scandal (I've sent him plenty on various subjects so I'm sure I'm on a list somewhere)

In light of your previous correspondence, I thought you would be interested
in knowing about the Senate Armed Services Committee hearing, which I
chaired, on conditions at Walter Reed Army Medical Center on March 6,
2007.As you may know, a recent series of Washington Post articles described
deplorable the living conditions, the failure to account for, and the
bungled administrative processing of injured troops in an outpatient status
at the Walter Reed Army Medical Center. New reports indicate that these
problems are not confined to Walter Reed. Unfortunately, they exist
elsewhere in the military and VA medical systems. Our nation has a moral
obligation to provide quality health care to the men and women who put on
our nation’s uniform and are injured fighting out nation’s wars. This
obligation extends from the point of injury, through the evacuation from the
battlefield, to first class medical facilities in the United States, and
ends only when the wounds are healed. Where the wounds cannot be
healed, we have an obligation to provide quality care throughout the lifetime of
the veteran.

So, you have to give him props for that anyway. Even if he's a damn socialist.

But you heard it here...you want to see health care under a socialized system, just go to a VA or military hospital. Not that current hospitals are models of efficiency mind you, but they still tend to be head and shoulders above their governmental-run counterparts.
at 3/07/2007 05:37:00 PM No comments:
Labels: Military, socialized medicine
Newer Posts Older Posts Home
Subscribe to: Posts (Atom)
“Crouch down and lick the hand that feeds you. May your chains rest lightly upon you and may posterity forget that you were our countrymen.” - Samuel Adams