I just wonder if the huge layoffs at GM made the swine flu.  No, I don't think that the US government caused the swine flu in Mexico, knowing that the illegal and legal traffic between the two countries could guarantee the spread...I'm crazy, but I'm not that f-ing crazy.
But the complicit media, who would rather take a flaming enema than tell the truth about what's going on in the economy, found this story just in time to ensure that the 20,000 lost jobs at GM, and the 10,000 lost jobs at Chrysler were relegated to the back pages of the newspaper or barely reported on the evening news, in favor of the panic-driven flu story.

Let's be clear, less than 200 people have it in the US.  That doesn't even surpass the number of people who had the 'regular' flu last year in the city of Kalamazoo.  And yes, you can die from the regular flu as well.

And had George W. Bush's administration approved a photo-op with Air Force One flying low and slow next to the Statue of Liberty, accompanied by F-18's, costing the tax-payers $328k, there would have been protests in the streets and calls for investigations.  Anything from the press or dimwitocrats about the chosen one approving this?  *crickets*

Just more evidence that this country is being driven straight to hell by the media who refuses to criticize the leadership which agrees with their agenda.
at 4/29/2009 08:20:00 AM No comments: 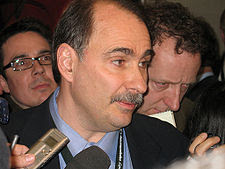 One of President Obama's closest advisors, David Axelrod called the 'Tea Party' movement "unhealthy" over the weekend.  He said "I think any time you have severe economic conditions there is always an element of disaffection that can mutate into something that's unhealthy".

Well, we should take this with a grain of salt of course, since Mr. Axelrod is such a quality person.  Let's look at the some of the other people he's worked for prior to helping President Messiah save the world.

1.  Eliot Spitzer - Axelrod helped the hooker-addict get elected to governor of New York as a campaign advisor.  Nothing unhealthy there..moving along
2.  John Edwards - Axelrod was one of the main consultants on the John Edwards campaign.  He was eventually relieved of his responsibilities of developing advertising, but remained a spokesman.  One wonders if he knew of Mr. Edwards' extra-marital activities....probably not, completely healthy, move on.
3.  ASK services - Axelrod (the A in ASK) was partners in a political consulting/PR company which lobbied (gee, a lobbyist working for the Messiah?  NOOOOO!!!) for companies such as Exelon Corp (a nuclear energy company), AT&T, Cablevision, and ComEd.  Most ethical administration in history?  Check.

Reverend Jeremiah Wright criticized Axelrod about a year ago for being too white.  He said "while he was expert at promoting black candidates with white voters, he did not know much about relating to the black community...They're spiriting him away from people in the African-American community. David doesn't know the African-American church scene".  No word on what Reverend Wright thinks of the first amendment.

So, let me make sure I understand this correctly, Axelrod's opinion is:
Yep, that sounds about like the logic of a dumbass.  Welcome to Dumbassville, Mr. Axelrod, population:  You.
at 4/20/2009 08:42:00 AM No comments:

Marcus Luttrell at the NRA

Funny how President Obama has several teams of bad-asses like Luttrell at his disposal, yet that ship captain is still being held hostage. Those guys are trained for situations EXACTLY like this, but Barry doesn't want to offend foreign sensibilities.
One wonders if they were arabic pirates or white pirates, if the decision-making process would be so arduous.

Hero gets his dog shot

If you've never heard the name Marcus Luttrell, I'm not surprised.  The media wouldn't publicize a true hero like him because it goes against their agenda.  Marcus Luttrell, in our era of calling sport players "heroes", and movie stars "heroes", is a true hero in every definition of the word.  Marcus Luttrell is a Navy SEAL that I've written about previously here, but I'll recap.  He was in Afghanistan when his SEAL team was ambushed and the rest of his team was killed in a series of gun battles with the Taliban.  He survived with the support of some villagers and the training and heart of a hero.  He lived to write a book called Lone Survivor which was number one on the New York Slimes best seller list for 6 weeks or so and if I remember right, is still on the list.  You can buy it at Amazon by clicking on the link to the right here or at your favorite bookstore.  This man is trained to kill.
Marcus was in his house the other day and a carload of drunk idiots pulled up, pulled a .357 magnum and killed his yellow laborador retriever, Dasy.  He chased the car for three counties, at speeds up to 110 mph before the police finally caught up to them and apprehended the wastes of oxygen that were driving in the car.  During his time recovering from the wounds received during combat as well as a parasite that he got during his escape, his dog was by his side 24x7.  Normally a man's dog is sacred, but this dog was not only that, but his best friend, his psychiatrist, his counselor, and his confidant.  And these scumbags take the dog from him in an act of random stupidity that can only be described as psychotic.

If Michael Vick gets months of newsprint for killing his own dog, don't you think that some dick-cheese that killed a hero's dog deserves a bit of press?  But when I do a search on Marcus Luttrell dog I find references to ONE news article, barely two pages long in the Dallas Morning News, and YouTube videos of Glenn Beck following the story.  Other military and conservative bloggers are following it of course, but ABC news?  No.  CNN?  No.  NBC?  HELL no.  Not one major news site carried any news about this atrocity.  I even went to CNN (as much as it hurt to do so) and did a search on their site, only to have them refer me to the YouTube of Glenn Beck.

I'm not trying to make a comparison between Michael Vick and these scuzzballs, there isn't one.  He was out to make some money and these ass-bags were just randomly shooting dogs.  Michael Vick is public enemy number one for several months because killed a dog that wasn't performing that belonged to him.  These fart-nozzles randomly kill SOMEONE ELSE'S DOG and get zero press.

WTF is wrong with this world?

TSA harassing a US citizen

The police state exists even in the Obama administration.  A US Citizen who is "suspicious" to a TSA agent because he's carrying $4700 ($5300 less than the legal limit) is given all kinds of hell by federal agents who act not only inappropriately and unprofessionally, but it could be argued, illegally.

Anyone who pays any attention at all knows that Joe Biden has been near the front of the 'drug war', helping to sponsor laws that made it illegal to ship drug paraphenalia through the mail, made it illegal to throw a rave, and all kinds of other things that, in my personal opinion, pretty much violate our constitution, but that's neither here nor there. What's important is to understand that Joe is perfectly fine with throwing people in jail for recreational drug use as well as being a dealer.

Anyone who was paying attention during the election last year also knows that Sarah Palin has a daughter who was impregnated out of wedlock and if they're still paying attention, they know that her and the baby-daddy, a self-professed "redneck" have since split up. It was splashed all over the media, everywhere from the NY Slimes to Saturday Night Live, making fun of the fact that a teenager had gotten pregnant and all the while her mom (the vice presidential candidate) preaches abstinence. Of course they didn't mention that her mom also preaches birth control but that's for another discussion.

How are these two things related, you rightfully ask?

A conservative's daughter does something that may publicly embarrass the conservative by going against her parent's beliefs and it gets the cover of People magazine and spoofed on SNL. A liberal's daughter does something that may public embarrass the liberal, like say, get filmed snorting several lines of cocaine when she is the daughter of a well-known drug warrior, and it's 'snowed-under'....pun intended. Have you seen this news anywhere? No. Of course not. Because the guy who is allegedly shopping this video to various news organizations isn't getting the $$ he is asking for (of course not, it's not news they want to print). Were it one of the Bush twins, he'd own an island and be surrounded by beautiful pool-girls, without even owning a pool by now.  And what is the severely jacked up part of this whole thing?  The guy who is shopping the video is possibly facing prosecution for possession of drugs, which of course is only shown in his video.

Moveon.org created a commercial that asked President Bush who was going to pay for his deficits.  Redstate.com has remixed it, but not much.
at 4/02/2009 10:24:00 AM No comments:
Newer Posts Older Posts Home
Subscribe to: Posts (Atom)
“Crouch down and lick the hand that feeds you. May your chains rest lightly upon you and may posterity forget that you were our countrymen.” - Samuel Adams