Just in case some of you thought that I could complain generally about wasteful government spending but didn't have any direct experience, here's one local example of government stupidity. 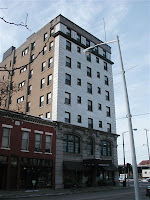 In the city of Kalamazoo, MI, the Rickman House, a local homeless facility that currently has the facilities to house 84 homeless folks in order to give them sort of a 'half-way' house to stay in while they get on their feet.  The Rickman isn't a great place, it's an older, run-down building, with the current rooms being 150-200 square feet, but with common areas such as kitchens and bathrooms.
A federal grant, with matching state and local money, all totaled to be around $12.3 million was just given to the Rickman house for renovations.  I'm not a big fan of pouring this amount of money into a building for folks to sit outside of and smoke, panhandle, and be general public nuisances, but if a few people use it as it's intended to be used, to get back on their feet, then their contribution to the local economy will make it worthwhile.  Do the math though, and at 84 people,  that's $146,428 and change per person.  They could buy a house for each of those people and rent it to them for that sort of cost and still have a ton of money left over for maintenance of the house.

Here's the even bigger rub though:  with the renovations, they will increase the size of the efficiencies to make it only able to house 46 people.  So, let's do the math again:  $267,391 per person.  And somehow this fits the local 10-year plan to end homelessness by making 38 people homeless.

US Federal Government: Inefficient and wasteful even by Soviet standards

The federal government mailed out millions of stimulus checks this spring in a (weak) attempt to get the economy going.  Fortunately for the fraudsters and criminals out there, many of these checks were mailed to dead people.  In Long Island, a woman received a check for her dead husband who died 34 years ago.  Worse yet, he hasn't even been in the US since 1933, when he left to return to his home country of Italy.

And these are the people that many citizens are pushing to be put in charge of our health care??

Most ethical administration in history

During the Bush administration, President Bush and VP Cheney were accused of supporting the war in Iraq to further the interests of Haliburton, the company that Cheney worked for prior to accepting the VP spot.  Opponents said that it was profiteering and that the no-bid contracts awarded to Haliburton were pay-offs.  Whether they were or were not, or whether Haliburton was just the only company big enough and with the history to be able to perform the functions that they were being contracted for is really a moot point, since it's over and done with right now.  However, during that time, Dick Cheney never received a dime from that company, nor was his trust, which was locked away and frozen, receive any additional enrichment from these contracts (public record, do the research...I did).  Cheney resigned from his position at Haliburton and also declined long term compensation which he was contractually due, because of the possibility of the mere  appearance of conflict of interest.

That having been said, the new administration, self-titled as the "most ethical and transparent administration in history" will have a Treasury department nominee who will continue to get paid by his former employer, TIAA-CREF, a large financial institution.  Now, theoretically, he could recuse himself from anything that involves TIAA-CREF and remove any appearance of conflict of interest.  But do any of us really believe that even if he isn't involved with the actual activities, that his influence won't be felt?  Really?

But yet, it's the Bush administration that was crooked and corrupt.

And yet, the sheeple just keep whining about petty stupidity.  Back when I was in high school or college, I read somewhere that the magazine with the higest circulation rate was People magazine.  I was shocked to find that if you combined the subscriptions to Time, Newsweek, and US News and World report, it would be about half or 75% of People.  That explains a lot.  Our nation is being stolen out from underneath us and they're reading about whether Lindsay and Samantha can get back together.  Our 'leaders' tell us "you just keep yourself stupid and entertained, we'll protect you and do your thinking for you".

Pretty inspirational.  The CodePink idiots who came up with Petraus = Betrayus are complete wastes of oxygen.

Are you REALLY surprised? Anyone?

A report from AP (of all people) shows that the people who need the stimulus dollars spent in their areas the most, those areas who have the highest unemployment, are getting the least (or NONE) of the money.  And the areas where unemployment is ridiculously low, are getting all kinds of funds.

Is anyone really surprised at this? Isn't this what the 'pork' fights were all about?  That areas with the most influential congressmen would get the money and it wouldn't get put where it belongs?  That and the whole octupling the size the bill really needed to be.

For example, Elk County PA, where unemployment is in double digits, is getting 0 (that's zero) dollars in federal stimulus funds.  But Riley County KS, where unemployment is 3.4%, is getting $56 million to build a highway, improve an intersection, and restore a historic farmhouse.  Restore a historic farmhouse?  Really?  What the hell does that stimulate?

Why I will never buy a Chrysler. Ever.

Had the government backed off on their demand that the secured creditors (the people who by law are paid back first during a bankruptcy) take a discounted amount of what they were due, I may have considered it.  But then, to have them not even get an equity share of the company is complete and utter trash.  The UAW gets a 55% share in the company for the forgiveness of a payment owed to their pension fund of $4.6 billion.  The secured creditors get 33 cents on the dollar for $6.9 billion in "secured" loans.

If that's not a political payback for the UAW rounding up votes (dead or alive) for The Chosen One, I don't know what is.  And the fact that the media is portraying the groups that did the lending as speculators is an utter joke.  I guess that's why all the newspapers are failing, they don't bother to investigate anything (unless it's a Republican thing), they just regurgitate whatever pablum The Chosen One spews.

The only good thing is that when Chrysler goes belly up and dies, the UAW will be left with worthless stock.  Hopefully that will be before the government props them up with billions of dollars in new "stimulus".
at 5/09/2009 08:53:00 AM No comments:

Are we headed in the right direction?

According to an ABC/Washington Post poll, 50% of the people polled think the country is headed in the right direction, economically. That's up from the 19% that thought the same the week before The Chosen One's inauguration.  You will also notice that in that same time period, the media has focused on postive economic news (what little they could find) and the new 'glimmers of hope' that the Obama team seems to be finding in the dung-heap that used to be called the American economy.

Funny how once it became The Chosen One's economy, the media finds positives, but that really doesn't surprise anyone, does it?  But let's look at the numbers:
Unemployment:  Highest since the Jimmy Carter Recession under Ronald Reagan in 1983.  And those numbers are suspect, since the US Government is hiring a ton of people for the new stimulus work as well as the census.  Those aren't permanent jobs, once the money runs out (or the project in the case of the census) those people are unemployed again.  And the really messed up part of the whole report?  It's being taken as a positive because job losses were slower than expected.  Love that Orwellian doublethink.
Chrysler:  Bankrupt.  Investors/Creditors being picketed by SEIU labor members at the behest of the Obama administration to pressure them into taking a much worse deal than they should.
GM:  Almost bankrupt.  Probably will file bankruptcy when the government rejects their latest recovery plan at the request of the UAW.  The UAW wrote a letter to the government requesting that they reject the plan because it included cutting almost 30,000 union jobs.  No selfishness there.
Federal Reserve:  Trillions of dollars of both on balance sheet transactions and off, that no one really knows who has the money.  Trillions, with a T.

Come on people, get a clue.  Just because the media and The Chosen One tells you that things are getting better, we're suddenly headed in the right direction?  Anyone notice that the Swine Flu turned out to be a non-story in the US about the same time that GM was ready to declare bankruptcy and Chrysler does?  Coincidence?

Greatest response to a jury duty summons EVER.

I know we all hate jury duty, but apparently, this guy hates it with a little more passion than the rest of us (from TheSmokinggun.com) :

at 5/01/2009 02:39:00 PM No comments:
Newer Posts Older Posts Home
Subscribe to: Posts (Atom)
“Crouch down and lick the hand that feeds you. May your chains rest lightly upon you and may posterity forget that you were our countrymen.” - Samuel Adams