Either I've been really busy or I've decided that blogging isn't that important.

Probably a little of both. Finished my 5th of 6 classes for my masters of information assurance, and that took some major time the first couple weeks of August. One more to go...

Watched Hotel Rwanda tonight...man, depressing movie, especially when you consider it's based upon a true story. But definitely shows the complete and utter worthlessness of the United Nations peacekeeping forces....what a waste of energy.
at 8/28/2007 11:14:00 PM No comments:

In yet another attempt to kill Americans, Chinese manufacturers have created children's toys with an excessive amount of lead in them, and the toys are now being recalled.

Am I the only one seeing a pattern here? We move all our manufacturing off-shore to China because it's cheaper and now we get stuff like this.

They poison our dogs with tainted dog food, poison our pigs with tainted pig food (will of course eventually reach our digestive system...mmmm...ribs, bacon and other yummies). They add cardboard to egg rolls in order to make them cheaper, cardboard that has been softened with a chemical that shouldn't be consumed by people. They export toys with lead paint like the popular Thomas the Tank engine, jewelry with excessive amounts of lead, faulty baby carriers that result in babies falling out and getting bruised, getting skulls cracked and hospitalizations, and exploding air pumps that have resulted in 13 lacerations including six facial injuries and one to the eye.

And my wife wonders why it is that I constantly look for the 'MADE IN ____' label on the things I buy.

Not saying that the stuff made here in the good ol' USA is that high a quality sometimes, but I can guarantee that I don't have to worry about it having cardboard instead of pork in it...or lead, melamine, or anything else, without that being on the ingredients list.
at 8/01/2007 10:36:00 PM No comments: 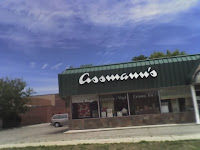 I finally found a store that I can get behind. Seriously, they have the best shit in town. And you don't take it in the rear when you buy stuff there. They're not number one, but they're definitely number two.

For those of you in the Mount Pleasant area, or who have attended CMU, this place is right there on Mission.

Love it.
at 8/01/2007 07:56:00 AM No comments:
Newer Posts Older Posts Home
Subscribe to: Posts (Atom)
“Crouch down and lick the hand that feeds you. May your chains rest lightly upon you and may posterity forget that you were our countrymen.” - Samuel Adams