Granholm renig on a campaign promise?

Some folks are making this to be a bigger thing than it is. In this commercial Jenny the Canuck states that she won't raise our taxes so that big corporations (read: evil corporations) will pay less. Some folks are reading that as her saying she's not gonna raise taxes. I'm not taking that meaning, but I figured that I'd let y'all figure it out yourself. Oh yeah..and I need to get that clip where she says "And in five years, you're going to be blown away" and edit it to make it look like she is saying "And in five years, you're going to move away"....because we're getting blown away Jen...thanks a lot.

Am I on crack or is this reporter?

In a story on the LA Times website, they reference Hillary's uncanny ability to raise money in areas where no candidate was successful doing so before. Specifically, they point to thousands of dollars coming from waitresses, dishwashers, and other low-paid people who live in New York's Chinatown. They attribute her success to her ability to get the community leaders behind her and get them to convince these people to donate.

I have another theory, call me crazy if you want....

How about, these people don't really exist and that they are merely fronts for illegal campaign donations?

Just throwing that out there. It seems that Hillary has this problem on a regular basis, as did her husband. Google John Huang, James Riady, or Liu Chaoying and do a little research and you'll see that her husband had amazing support from the Chinese immigrant community. Bafflingly high support when it comes to fundraising.

The article seems to insinuate this theory of mine, but it's obvious that the author didn't want to start another investigation, as they never come out and really say it.....

If assholes/liberals (interchangeable) are going to insist upon the 'fairness doctrine' in radio, let's have it in newspapers like the LA Slimes as well, eh?
at 10/19/2007 03:50:00 PM No comments:

Since I 'came out' the other day, I've had several questions both via email and in person and I thought that instead of answering them again and again, I'd rather answer them here. One, it gives me something to blog about, and two, it makes it so I don't have to repeat myself forty times.

Why do I support Ron Paul when he voted against the Iraq war?
Well, I figure that in today's political climate against the war, no one is going to come out in SUPPORT of the war. It's political suicide with the way that the major media has brainwashed the majority of the population. Yes there are candidates whose beliefs run more closely to mine in regards to the war, but that's only one aspect of the political spectrum and with so many other things out there to discuss. Additionally, Dr. Paul's vote against the war was more a statement upon the expansion of the Imperial Presidency and the power that the legislative branch is giving up to the executive branch rather than a vote against the war per se. Additionally, Dr. Paul is against the use of the military as president clinton did, as a police force in Serbia et al, as am I.
However, this IS the one stance that eventually may cause me to rethink my support at some time in the future. His moderation of his opinions from 2002 have been his saving grace in my eyes.

Do you really expect him to win?
Not at all. But wouldn't it be a kick in the teeth to both the Republican and Democratic parties if he did? Someone who is against the entire government support structure that the two major leeches off the government teat getting elected would cause a major outcry in DC from those who have made their careers on retaining one portion of the electorate or another based upon governmental reliance. What I do expect is that the major candidates will be forced to talk about and address the positions of Dr. Paul. If he brings enough influence to the table during the primaries, he will be able to influence the platform of the Republican party and perhaps swing it back to the limited-government party that it was under Ronaldus Magnus. Much unlike the current fat, bloated, disgusting mess of a party that it has become over the past 10 years. I don't blame President Bush for this, although he's allowed it to happen. It's the so-called Republican leaders in congress who have never met a federal program they didn't like. And unfortunately, President Bush had forgotten that he could veto things during these spending sprees or was afraid of what the NY Slimes would write about him if he did.

Do you really agree with the other groups that support Dr. Paul?
Anyone who asks this question obviously doesn't either know me or hasn't read much of this blog. Of course not. Truthers are morons. Anyone who believes that the government committed the atrocities of 9-11 needs a big-assed sign that they must carry to warn others that that they are in the presence of someone with an IQ lower than room temperature. And racist groups are generally ignorant white/black/hispanic/whatever trash. That would be TRUE racist groups, like the NAACP, KKK, Black Panthers, La Raza, etc. Not groups that are labeled racists by liberals because they espouse ideas of equality as opposed to favoritism based upon race.

How much have you donated to Dr. Paul's election effort so far?
None of your damn business. Want to know? Look up my name in the FEC records.

After reading, researching, and doing a lot of looking around, I've found my candidate. His chances of winning are pretty slim, especially since major media has largely ignored him, but he's the guy that would put this country on the track that we need to be on. He's the only true conservative in the field, and by conservative I don't mean bible-thumper. I mean my kind of conservative.


So, the official WTHIWWY Blog endorsement goes to:

Got nothin else to add 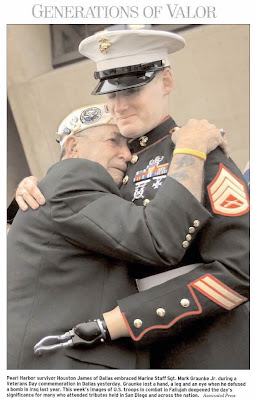 Google Sucks - Yep, back to that

So much for 'don't be evil'. Google's supposed company motto is apparently 'don't be evil, unless it helps your political pals, then hey, go for it".

Google has banned ads purchased by a committee to help re-elect Susan Collins (R)ino, ME. Apparently she has become a target of Moveon.Org and they've helped her opponent raise over $250,000. But when Senator Collins attempted to purchase ads on Google to rebutt the attacks, Google said that they would violate trademarks, copyrights or some other such nonsense and wouldn't allow them.

Funny how Google allows ads that denigrate all kinds of others like Michelle Malkin, Ann Coulter, President Bush, et al, but has zero problem banning advertising that attacks their buddies at Moveon.Org.

I can't say it's censorship because only the government can censor people's RIGHT to free speech. Google can truly choose who they want to sell advertising to, being an independent corporation.

However, perhaps next time you're doing a search, you'll choose Yahoo, Dogpile, or some other less obviously biased search engine.

Yep... Google Sucks
at 10/11/2007 08:35:00 AM No comments:
Labels: Google Sucks
Newer Posts Older Posts Home
Subscribe to: Posts (Atom)
“Crouch down and lick the hand that feeds you. May your chains rest lightly upon you and may posterity forget that you were our countrymen.” - Samuel Adams