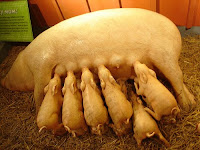 Stimuluswatch.org does a great job of detailing the various pieces of pork, how much money is allocated to it, where the pork is being spent, and how many jobs are being created from the project. Remember though, this is the congressional estimate of how many jobs are being created, so it's probably at least double the real number, since they want credit for creating as many jobs as possible, when in reality they're probably not creating jack, other than a ginormous debt for my great-grand children to pay off.

$17.5 billion (yes, that's a B) for "Energy Efficiency Industrial Zones" in Cidra, Puerto Rico.
WTH does that even mean? And $17 billion? I'm willing to bet that we could buy the entire island for that. The bill states it will create 1628 jobs. For those of you who can't afford calculators because of all the taxes you're paying, that's $10,749,385 per job. Really? How about we just cut a check for $4425 to each man, woman, and child on the island to buy a couple of pigs each? I rate this one big porker

$2.463 billion for a mass transit system between Miami Intermodal Center, extending their 'Orange Line'. 10.5 miles worth of pork, for an average of $243 million per mile. They're estimating that 400 jobs will be created from this piece of ham, which averages $6,157,500 per job. DAYUM...I want one of those gigs. I definitely rate this a big porker as well.

$500,000,000 to provide solar water heaters for rural area families in Cidra,Puerto Rico. Now I'm not sure who the congressman in Cidra is, but I am sure that constitutionally, he or she doesn't have a vote. But they damn sure have a lot of pull, getting the first item on this list as well as this one. While I'm all for going solar, especially somewhere like PR where the sun shines most days, I'm certainly not sure why it is that my tax dollars are going to pay for it. 14 jobs are estimated to be created by this itty bitty pork project, which comes out to a little over $35, 714, 285 per job. Nevermind what I said about the Miami jobs, I want one of THESE! I rate this one as a double-porker.

$2.16 billion to fund the 'Solar Los Angeles' project. This will create a solar infrastructure for LA and help provide energy for the area through solar power. A good idea on its face, but again, why are tax-payers from around the country paying for California's piss poor planning? 10 years ago they effectively destroyed the power industry in CA, causing rolling blackouts and the state to purchase energy from other states. And now we have to pay for it because California doesn't want to make a power plant in their own back yard? Hell no. This huge sow says they'll create 31243 jobs, but I'm not buying that at all. Especially since the language in the bill says that all the work has to be done by the LA department of public works, effectively locking out private industry, who really has the expertise in this area. But let's give them the benefit of the doubt and say 20k jobs. That's still $112,500 per job. In addition, the LA County, Orange County, and Santa Barbara county area has some of the most affluent areas in the country, many of which are left-wing libs. Let those air-bags pay for it.

The interesting thing about the funding of the majority of these projects is that there are no details regarding the funding of the upkeep of the projects. You really think the local area will pick up the maintenance of a project funded by the feds? Not a chance in hell.

These are a few of the ridiculous pork projects that are in the details of the bill, and the reasons why Obama, Pelosi, and Reid, the three Stooges, wanted to rush this bill through Congress so that we didn't get a chance to do the math.