Olbermann is a douchebag 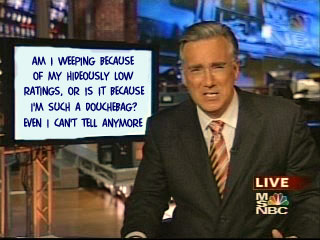 The idiot ex-ESPN'er apparently had a one-nighter with some hottie and she's spilling on him.
According to her, he's nowhere near as liberal in the sack as he is on his show.

Some NY gossip columnist posted the information in their column, and as a result, her blog has been hacked, slammed with comments, and generally dissed.